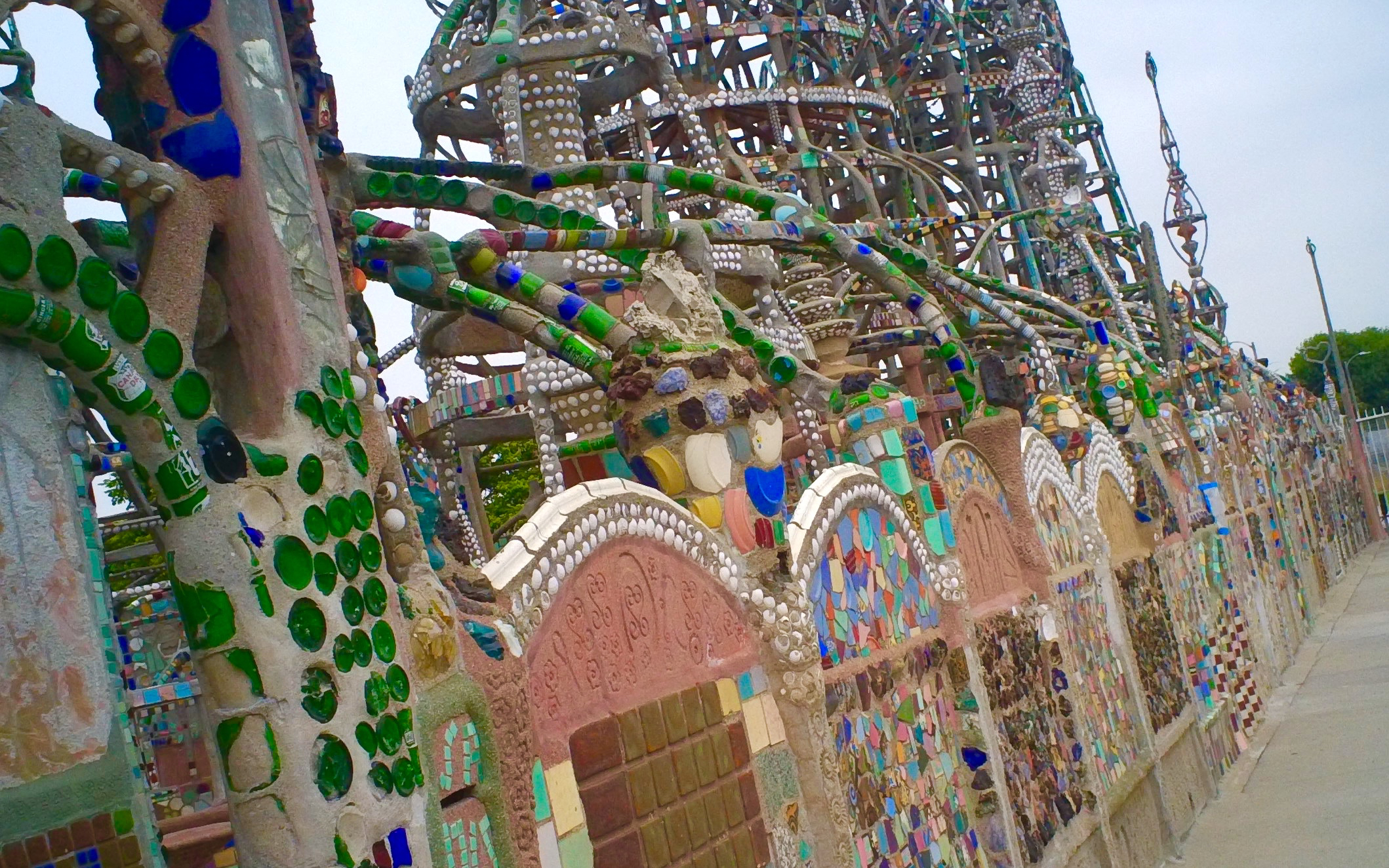 “You gotta do somethin’ they never got ’em in the world.”

Are you familiar with the outsider art of architect Antonio Gaudi in Spain? If you like his work, there is an excellent monument located in the United States, right in Los Angeles, that taps into the wonderful spirit of outsider art.

What is outsider art?

Outsider art includes works that are largely other-worldly and display a place that has “different rules.” Often times the work is dreamlike, folk, visionary, spiritual, or surrealistic in style. Here is a super article that shows important international monuments; this article features monuments specifically in the United States, including Watts Towers. (See the list! There are a number of California monuments!)

“You have to be either good good or bad bad to be remembered.”

Simon Rodia (1879–1965) was an Italian immigrant that lived in Los Angeles and built the now famous Watts Towers in the city of Watts. In the tradition of many outsider artists who never gained mainstream artistic notoriety during their lifetimes, but still continued to create art (Vincent Van Gogh, photographer Vivian Meier, nuclear physicist Richard Feynman) — no one is quite sure why he built this beautiful monument. Children from the local area would bring him bits of broken tiles and toys that he included in his creation. He began building the structures on land he purchased in 1917, and he continued building for over 33 years. In 1954, he suffered a minor stroke and shortly after, fell a moderate distance off one of the spires. He left for Martinez, California, where he lived with a family member until his death.

A few years ago, before it closed, my kids and I went on a field trip and toured the towers. The tour guide connected the unique shape of the towers to that of a ship, with tall masts. In this picture, it’s possible to have that interpretation. Rodia may have well been creating a ship to carry him away.

Currently, due to renovation, the City of Los Angeles operated monument is closed for internal tours. However, there are still guided tours from outside the fence. (The whole structure is quite narrow, and one can see details relatively easily from outside the structure.) Also on site, visitors will find the Watts Towers Art Center, a Garden Studio, and several events each year such as the Watts Towers Day of the Drum Festival and the Simon Rodia Jazz Festival.

This monument is a historically important place for Los Angeles, and many community events take place here. In our California history curriculum, California Out of the Box, we have included a section on the African American jazz scene that took place in this area from 1920 to 1955, as well as in other Angeleno communities such as Central Avenue and Leimert Park in Los Angeles. Monuments and community centers like these do indeed reinforce our belief that California history is indeed rich in the arts!

Young Children will enjoy this bite-sized monument. Who knows, you may even be inspired to put together an outsider art mosaic project of your own!

When the Covid crisis is over, head right over and feast your eyes on this wonderfully creative, uniquely Los Angeles place.

Take the Train to Watts Towers!