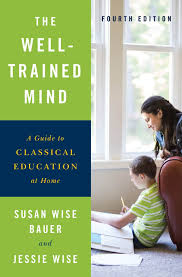 The Well Trained Mind by Susan Wise Bauer does an excellent job of empowering families, particularly the reluctant and unsure, they can do homeschooling. The book provides numerous resources to inspire and equip families to become teachers to their children. In the first section, she and her mother, Jessie Wise, recount their experience with homeschooling their children. Jessie Wise began homeschooling Susan in the 1970s. The book proceeds to lay out a plan for a classical-based homeschool curriculum through different phases of children’s development, from early childhood through high school. Wise and Wise Bauer describe K-4 as the grammar stage, 5-8 as the logic stage, and 9-12 as the rhetoric stage of development; each of the sections repeat themselves 4 years later, so that the student in theory will get the information once for each stage of their development. For example, the student would learn about Ancient history in 1st grade, Medieval/Early Renaissance in 2nd, late Renaissance-early Modern history in 3rd, and Modern history (1850-present) in 4th grade.  In 5th grade, the student would again cycle through ancient history and texts, but looking at more difficult texts.  Wise Bauer provides suggestions for how to accomplish a classical approach in all of these stages of development. She lists numerous resources and gives outlines to aid in curriculum navigation.

A classics based education is in some sense getting back to the best of western civilization (through learning latin, intense study of grammar, and great books).  As I read their book however, I had a feeling that there was a lot that might be omitted from such an approach — even one as well thought out as theirs.  I believe there are other organic progressive approaches which emphasize culture learning — other than western civilization. Western civilization is part of the story.  During my time in my undergraduate education; I switched from being an art major to studying art of the explictly non-western world. I was so delighted during my time at UCLA, studying monument after monument in Japan and India. I

experienced a sadness that I had lived for 20 years; and not ever really seen these treasures that existed in other parts of the world. Limiting oneself to a classical education alone does not allow for exploration of other cultures that is at the heart of my own approach. I feel it’s a good use of time for children and families to really explore their own culture and values, and learn about people that are very different than them, from very early on.