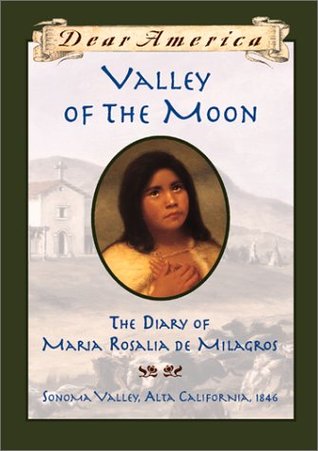 We drive on freeways, take commuter trains, and ride light rail to get to school and work. Surrounded by multi-storied buildings, concrete roads, tall fences, and large parking lots, it is hard to imagine the land of California before this infrastructure. While driving around, I often times wonder what our state looked like as the mission system was disbanding, when Mexico controlled California – that space between the 1820’s and 1849, and gold was discovered on the American River.

Many wonderful insights on life in this period can be found in the historical fiction diary Valley of the Moon: The Diary of MarÍa Rosalia de Milagros by Sherry Garland. This installment in the Scholastic Dear America series chronicles the life of an orphan girl who is half Suisun Indian, and half of another race, that she herself is unsure of. She was found by one of the Padres at Mission San Rafael when she was five. She found herself as a young teenager working as a servant girl on a rancho—for a wealthy Spanish family that feels the threat of waves of Americano settlers coming from the United States. Additionally, the family does not feel protected by their absentee landlord—Mexico. There is much unrest due to the power vacuum that remains, leading up to the Bear Flag Revolt, then the 25-day California republic, and finally the founding of the State of California. Rosalia meets major historical figures: Johann Sutter, Mariano Vallejo, Mark Twain.

Through the eyes of this 13-year old girl, the reader will learn about children that lived on a California mission; they will participate in many festivals such as Las Posadas, Dia de Los Muertos, and herraderos (rounding up of cattle). This story is efficient: Young students of California history will step back in time and experience life through careful, age– appropriate storytelling, and be educated on cultural traditions. Rather than just learn this time period through dry history and isolated events, this story is a meaningful way to contextualize the time period and bring it to life. Reading this book, I can almost imagine myself riding in the oak woodlands of California, viewing California in the vastness of the period of the ranchos—not the tightly packed city I now find myself in.

Update (Fall 2018):  This story is one of the five books used in California Out of the Box, our new California history curriculum.